JACKSON, MI – A handful of Jacksonians – current and former – have adopted a common phrase to describe their thoughts on the future of the city.
“Last one out, turn off the lights,” the saying goes.
But that’s not the attitude of most city officials or Jackson entrepreneurs. And they’re putting up the investments to prove it.
The collective focus is on downtown – with hopes that a vibrant downtown eventually spurs growth throughout the area.

20 new developments changing the landscape of downtown Jackson
Here’s a list of a few of the newest elements added or coming to downtown Jackson.
“Attracting and keeping millennials and educated people is key,” said Mindy Bradish-Orta, president/CEO of the Anchor Initiative, Experience Jackson and the Jackson County Chamber of Commerce. “Having an urban core that’s vibrant is going to help do that. The core of any community has to be strong in order for the rest to be strong.”
How does Jackson change its fortunes and become a thriving, desirable city of the 21st century? There’s already a plan in place.
Jackson’s downtown past
In Jackson’s heyday – the mid-1900s – people dressed up to come downtown.
Residents frequented department stores like Fields, JCPenny and Jacobson’s and dined at places like the Rose Room and the Cortland Room.
“It was a reason to come downtown,” said Wendy Clifton, owner of A Frame Above and 180 Chic Boutique, 180 W. Michigan Ave. “You didn’t just get in your car and go. You actually got dressed up. It was just a magical place to be – especially at Christmas time.”

Peek Through Time: J.C. Penney Co. joined lengthy list of downtown Jackson department stores in 1940
The largest retailers in town already lined Michigan Avenue from Blackstone to Francis streets when Penney’s came to town.
But across the country, department stores relocated to malls and restaurants closed down, leaving downtown cores barren and lifeless.
Jackson was no exception. You could roll a bowling ball down Main Street without hitting a car, said Rick LeMaster, who owns several downtown properties.
A shrinking city didn’t help matters. Employment declined in Jackson, with companies like Goodyear and Clark Equipment moving out of town in the 1980s.
Over the years, the national perspective on downtown areas began to change. Slowly, urban cores across the country became assets again.
“The most successful places right now in the entire country are walkable, urban places,” said Shannon Morgan, who’s leading the redevelopment project for the Hayes Hotel with HRS Communities. “We need to focus on infrastructure that’s in a small, dense area.”
Is it time to invest in Jackson?
Just like the shift from downtowns, Jackson didn’t escape effects from the 2008 recession. Unemployment peaked at 15.7 percent in the metropolitan area in July 2009, according to the U.S. Bureau of Labor of Statistics.
A look at the unemployment number and rate in the Jackson metropolitan area since 2006.Milton Klingensmith
“People relied on their homes for retirement,” said Jackson City Manager Patrick Burtch. “When the recession hit, some lost 70 percent of the value and owed more than it was worth. People started walking away from their homes.”
The vacant, dilapidated houses diminished home values across the city. While values have started an upward trajectory again – which Burtch credits to the demolition of nearly 700 homes in Jackson – residual consequences remain.
They serve as a reminder of a bygone era — these thousands of vacant homes that dot the landscape of the city of Jackson.
“If I just wanted to make the most money I could, we’d be building something in Ann Arbor or Lansing or Grand Rapids,” said John Burtka, CEO of the Grand River Brewery and developer of the Lofts on Louis. “You have a higher rate of return on your investment there.”
To help finance some larger projects, the city of Jackson has offered tax abatements – allowing select new developments to be property tax-free for a few years. A vacant plot of land doesn’t bring in any property taxes at all and does little good for the city, LeMaster said.
“There’re three types of people: The people that make things happen, the people that watch things happen and the people that say, ‘What happened?’ LeMaster said. “You’ve got to be the people that makes things happen, and I think we’ve got a city government that is trying to make things happen.”
While the Neighborhood Stabilization Program started just five years ago, the beginnings of the blight dates back decades earlier.
Other business owners agree the city is on the right track, saying the tax breaks allow structures to get off the ground while creating a larger, long-term tax base with new businesses and residents.
Though some downtown projects – including the Lofts on Louis – are receiving tax abatements to build, other developments are budding without help.
LeMaster, who first opened a business in downtown Jackson in 1998, owns the properties of three new restaurants in downtown Jackson – The Dirty Bird, Junk Yard Dog and The Chase. He’s also putting apartments above multiple downtown businesses – of which the demand is so high, LeMaster stopped adding names to the waiting list.
After years of urban decline, he sees the perspective shift – citing excitement among millennials to live, work and play in downtown cores.
“I think there’s more money to be made in downtown Jackson than anywhere in the United States,” LeMaster said. “I just think it’s undiscovered, and we’re finally starting to see that spark.”
While the Jackson skeptics remain, the city of 33,000 people has watched its unemployment rate drop to a 10-year low in September, to 4 percent.
“There’s no way we’re going to get back to 60,000 population, in yours or my lifetime,” Burtch said. “The manufacturing base is different now. People don’t employ 7,000 people to build 200,000 engines a year. They employ 500 people to build one million engines a year.”
As downtowns look to rebrand, the future has a different look than successful downtowns of the 20th century. A handful of redevelopment projects downtown will set the standard for future success – replacing the department stores and manufacturing jobs that previously propped up the town.
A catalyst for growth
One such redevelopment project is the Hayes Hotel. The downtown landmark opened in 1926 as a first class establishment in the heart of downtown. It has sat vacant since 2003, after serving multiple uses.
HRS Communities has a $27 million plan to revitalize the historic building as hotel, retail, restaurant and apartment space. 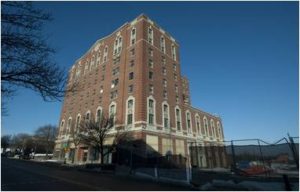 Council supports Senate bills that could help fund $27 million Hayes Hotel project
A slew of Senate bills could help fund the Hayes Hotel revitalization in downtown Jackson.
“Right now, the data is saying the time is right to see this spur in Jackson,” Morgan said. “When you start to see the employment sector surge, as we did in Jackson, with the right developments in place – even in economically distressed cities that have seen crime and had other challenges – we’ve seen it happen again and again.”
HRS Communities leads projects across Michigan, including some of the first condominiums in Royal Oak. While they could have picked from a number of projects to invest in, they chose Jackson, Morgan said.
Their goal is to start a snowball effect of downtown investment, she added.
A downtown map, showing new businesses that have opened or announced plans in downtown Jackson since December 2015.Milton Klingensmith 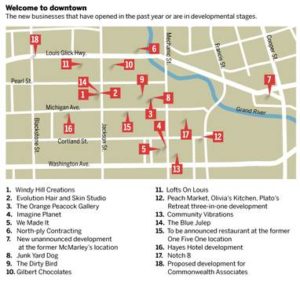 A downtown map, showing new businesses that have opened or announced plans in downtown Jackson since December 2015.

“One project can have tremendous impact,” she said. “(It can) also impact on other projects to come after this into redeveloping and revitalizing a downtown. We think the Hayes is certainly the poster child for that.”
While downtown Jackson can be hopping at lunchtime as employees take a break from work, city visionaries say it’s crucial to get people living downtown – inspiring nightlife.
Business and city leaders also consider Burtka’s Lofts of Louis project a catalyst for future growth. The $5.4 million project at 209 W. Louis Glick Highway broke ground in November, and tentatively includes an urban grocery and 30 apartments.

Lofts on Louis development breaks ground in downtown Jackson
The Lofts on Louis downtown Jackson development took hold after an unassuming meal at the Grand River Brewery.
Burtka also owns the Grand River Brewery, 117 W. Louis Glick Highway, and plans to develop the former One Five One restaurant at 151 W. Michigan Ave.
Following early successes at the brewery, other downtown eateries sprouted up. Burtka hopes the Lofts on Louis project has similar development-driving results.
What is the vision and how long will it take?
The resounding hope from Jackson entrepreneurs and city officials is for more – more restaurants, more living space and more entertainment.
It’s not a dog-eat-dog atmosphere among downtown Jackson business owners. They shop at each other’s stores, lend napkins to neighboring restaurants and actually hope for additional competitors.
While they may not get the same percentage of “the pie,” LeMaster said additional businesses bring additional business.
“If you’ve got a pie and you’ve got it sliced in so many slices, then you add another restaurant, it makes that slice smaller,” he said. “But in the big scheme of things, it brings more people downtown, so now you have a bigger pie. So now it benefits everybody.”
In the mid-1900s, people came downtown simply to “come downtown.” There were enough places to shop, eat and be entertained, without needing a plan in advance.
By creating enough individual destinations, Jackson itself becomes the destination, Bradish-Orta said.
“We want Jackson to become the destination,” Bradish-Orta said. “No one entity can do it alone.”
How long does this process take? Bradish-Orta, Burtka and Clifton all believe the vision for downtown Jackson will be realized within three years.
“I’d say within three years – four years for sure – you’re not going to recognize downtown Jackson,” Burtka said. “It’s an exponential change, it’s not an incremental change.”
Burtka’s vision has inspirations from Ann Arbor, where the streets filled with people on a regular basis.

The cities Jackson leaders are modeling their vision after
As Jackson government and business leaders look to revitalize the city, here are the cities they want to model after.
“That’s what I see. People on the streets walking, going to shops, going to restaurants,” Burtka said. “Walking the parks. Families, individuals, students, millennials, Gen-Xers, baby boomers all there.”
Downtown amenities aren’t far off, either.
CP Federal City Square is already on its way up – offering a community gathering space for movies, concerts and other events.
City and county officials are also discussing a proposed downtown launch site to the Grand River Water Trail, allowing kayakers a break on the trail spanning from Vandercook Lake to Lake Michigan.
Other ideas include a bike-sharing program, expanded downtown park area and the proposed independent league baseball team and stadium.
On the business end, more than 18 businesses have either opened or announced progress in downtown Jackson since December 2015.
With the recession over, housing values on the rise, businesses opening and ideas flowing, Burtch believes it’s time to be positive about Jackson again. His plans aren’t trivial – as he shoots for 200 to 300 people moving downtown within five years and another 10 to 15 restaurants.
He’s been criticized since starting as city manager in 2012 for pushing out the old to start the rebuild.
“When a community has gone down as fast as Jackson has – it’s taken 70 years to get here – but once it gets to a certain point, it keeps spiraling,” Burtch said. “If you don’t do something to interrupt it now and move fast in the other way, the momentum is just too far against you.
“We can’t be our own worst enemy. We’ve got to start thinking positively.”